A brand new school built from scratch, educating over 200 children. An achievement to be proud of! 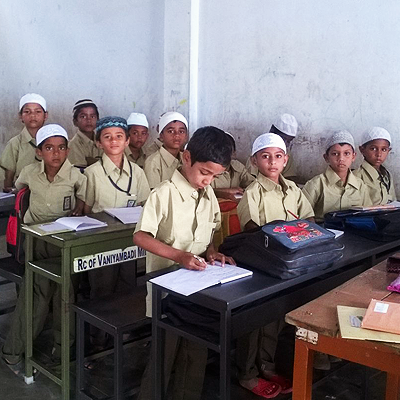 Phase One: The Hard Work Begins

H.E.A.T. partnered with HIRA, a local charity in Vaniyambadi, to begin the construction which would school up to 300 children once complete. During this phase local merchants and builders were given the much needed opportunity of employment and many children were ready to sign up.

By November 2010 the main structure of the building was completed and the project was in full swing to become fully operational for the start of the new school year in 2011.

By late 2011 Phase One of the project was complete and as a thank you for all the donations and continued support from the H.E.A.T. Foundation HIRA invited Umar Shariff to be the guest of honour at the official opening of the school. Umar had the opportunity to experience first-hand the difficulties local children face and how the contributions from the H.E.A.T. Foundation were making such a difference to the children’s lives.

Phase Two: An Invitation to India

Phase Two was the completion of the upper right wing to add more classrooms which included a computer room.

In March 2014 Umar Shariff and other local dignitaries and donors were invited for the opening. Umar was proud to see the school computer room which would give the children skills they would need in today’s digital world.